Poverty is a major contributing factor in violence and wars.

Tackling poverty in conflict areas is a massive challenge, however the economic model of fair trade that is used in more peaceful countries can also help to alleviate the problems in conflict zones, pioneers of fair trade say.

Imagine being able to offer people decent and fair pricing for their produce, which could in turn help support jobs and improve living conditions for producers, their family and local suppliers and businesses that they purchase from.

This could potentially divert people from joining militia’s and violent propaganda groups and extremists.

By increasing fair trade and developing sustainable, trust-based trading structures in conflict zones we can take steps to restore stability.

Also if the sales of fairly traded products in more peaceful and affluent countries increased we could not only raise awareness of conflict situations in countries but we could help them to achieve peace.

By people working together, as individuals, groups and even countries we can increase co-operation, trust and start taking steps in reducing resentment, anger and violence, creating positivity  and improving standards of living which are key fundamentals in peace.

Of course establishing trade in certain conflict areas can and will be hazardous, so a gentle approach will be required over time, taking small steps to create and nurture the trading relationships required to achieve the end peaceful result.

There are several serious conflict zones globally, but the case for increasing fair trade in these areas will, as mentioned, spread awareness and steps can, and should, be taken in these areas with a view to making a humanitarian difference to the residents on the journey for peace.

So next time you do your shopping, you should consider purchasing fair trade produce and play your part in creating a positive impact in these war torn areas, ending, or at least easing poverty, and take steps in developing a stable social structure.

This overall can help end the violence in conflict areas, increase equality and therefore promote a more peaceful world. 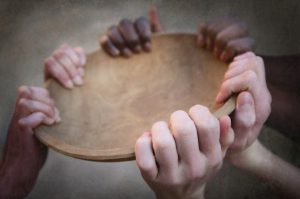